Home > The World of Peachtree Publishing > Backlist Spotlight > What It Took to Land a Man on the Moon: Summer Reading with Countdown

This summer is going to be filled with a few epic anniversaries. 60 years of space exploration, as well as the 50th anniversary of the Apollo 11 Moon landing! Find out about the long years and hard work it took before man took his first step on the moon with Countdown: 2979 Days to the Moon. Author Suzanne Slade‘s powerful free verse will also give you a chance to check poetry off your summer reading list.

With the upcoming 50th anniversary of the Moon landing, many educators and libraries are focusing on space-themed summer reading programs, like StarNet’s fantastic “Summer of Space,” to encourage readers to celebrate the history of space exploration and inspire children to dream big. Countdown is the perfect book to supplement these amazing learning program and resources because of its comprehensive look at the successes, failures, triumphs, tragedies, and lessons learned from the Apollo missions leading to an American Moon landing.

Countdown is one of the Smithsonian Air & Space Magazine‘s Best Children’s Books of the year; it also received NSTA’s Best Stem Books Award and was on The Planetary Society’s Recommended Space Books for kids list. Readers can dive more deeply into the space program with Countdown resources like this free discussion guide.

If you want to hear directly from award-winning author Suzanne Slade (a former mechanical engineer), read about the inspiration, 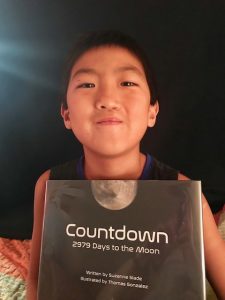 background, and journey that eventually became Countdown in her Author Q&A. Here’s a brief quote from the interview: “When you read about actual people—with their own fears and precious families at home, putting themselves in incredibly dangerous situations for the noble purpose of exploring space—it’s hard not to get emotional.”

Along with the critics’ 3 starred reviews, the readers themselves have spoken! Read about Liam and his family in this post as they discovered Countdown for the first time and were thrown headlong into the breathtaking and epic history of the Space program. Liam’s mom said “This book never talks down to children. Using science vocabulary, it marches them right along events in history as if they were there.”

Get your copy of Countdown: 2979 Days to the Moon today from local library, indie bookstore, or Barnes & Noble!