Home > The World of Peachtree Publishing > Author/Illustrator Talks > Saturday Afternoon Picnic with Kristy Caldwell
We’re taking a Saturday afternoon picnic with illustrator Kristy Caldwell today! Her latest picture book with John McCutcheon, Flowers for Sarajevo, is an uplifting story about the power of beauty in the face of violence and suffering.

Q: What part of this story did you most respond to?

A: Drasko’s personal situation is what struck me the most. He doesn’t have the luxury of ignoring the tension of the adult world. He has to navigate his own way through it.

Q: What sort of research did you do?

A: I wasn’t able to visit Sarajevo in person, but it was important to me that people who lived through the events of the story could recognize their city in the illustrations. The urban details, but also the atmosphere. I tried to immerse myself in different ways: reading first-hand accounts, listening to music, looking through photography books like Sarajevoby Tom Stoddart and Sarajevo Self-portrait: The View from Inside by Leslie Fratkin. It was easy to find references of the destruction and rebuilding of Sarajevo. It was much harder to find images of the city as it was before the destruction. I searched through hundreds and hundreds of photos online, comparing details against what I had read in articles and marking the locations of “Sarajevo Roses.” At this point, I think if you dropped me from a helicopter onto Ferhadija Street I could direct you to most of the major landmarks.

Q: Milo’s floppy hat appears in many of your illustrations.  Can you tell us about it?

A: The first line of the story is “See that man in the floppy hat? That’s Milo. He’s my father.” With those words John immediately set up a recognizable trademark for Milo. The next line is “He can sniff out the best roses in all of Sarajevo.” Milo and Drasko only get to spend a couple of pages together, but their relationship is the heart of the book, and the hat symbolizes that relationship. I knew I wanted to see Milo hand the hat to Drasko when he leaves for the battlefield, and I knew I wanted Drasko to put it on his own head for the first time after hearing Vedran Smailovic play his cello in the rubble of the breadline massacre. The music inspires Drasko toward his own selfless act, which also echoes the generous spirit of his father.

Q: Many graphic novels address difficult topics but are geared toward adults. Flowers for Sarajevo is for children. How did your consideration of this younger audience influence your artistic approach to this event?

A: I tried to keep my focus on Drasko and his immediate experience. I also made a conscious decision at some point to show the effects of the conflict—the market crumbling, plants wilting, and people scattering—instead of resorting to guns, tanks, and soldiers. 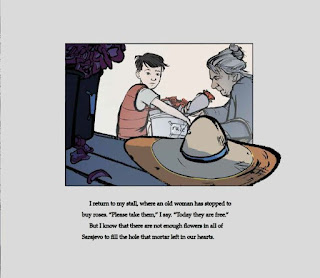 For the most part, I wanted the background elements to be flowing around Drasko, and every background character has to be on their own journey, with their own immediate task to focus on. That’s something I learned from theatre.

Q: What do you hope readers take away from your art?

A: I want readers to feel like they are experiencing a story in progress. Even though the real events took place at a specific time and in a specific location, the broader story is about a community stepping across lines of religion and race to support each other during a crisis. We can keep that story going.


Flowers for Sarajevo will be at your local library, indie bookstore, or Barnes & Noble on April 1st!