Home > The World of Peachtree Publishing > What We're Reading > Read-A-Thon: Moving on to the Ridiculous 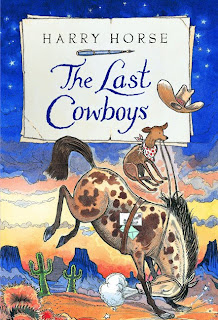 Author and illustrator, Harry Horse, has long been a favorite of mine. His series of books about the bratty Little Rabbit are always fun to read out loud. I adore his pen and ink illustrations so much, that I used one for the header on this blog.

Harry Horse went on to pen a series of books for slightly older kids, referred to as “The Last…” series. Starting with The Last Polar Bears, a grandfather goes on epic adventures with his mischievous dog Roo. The story is told through letters sent home addressed simply to “My Dear Child.” I thought that the first book was so weird and fun and quirky, that I wanted to read the other three books. Now I have a bit of time to do just that! Without further ado, I begin The Last Cowboys.

7:12 p.m. This is why I love Roo (the dog). She is going with Grandfather to America in search of her own Grandfather. Last Roo heard, he was in the Wild West:

“Of course, I have only Roo’s word for it, and in truth I do find some of the stories about her grandfather a little hard to believe. According to Roo, he was a famous film actor. She has pointed him out to me on several occasions when we are watching television and, if truth be known, he looks like a different dog in each one. Roo says that’s why he is an actor.”

8:15 p.m. Grandfather and Roo are stranded in One Horse Town with a bunch of hooligan  riderless horses that just made Roo their sheriff. I love the insanity of it all.

“Bad news. The Riderless Horses have elected Roo as their new sheriff. I think it ridiculous that a small dog should even be considered for the position. Roo said that her breed was the obvious choice, being renowned as sheriffs. What nonsense! There are police dogs, it is true, but I have never heard of a sheriff dog.”