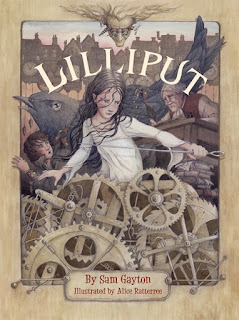 Imagine a world where people wear iron shoes in order to avoid losing a foot to a crab’s claws. A world where the people are as small as spoons, but their courage is larger than a lion’s. Lily is a young citizen of such a world—of Lilliput—when she is taken from its familiar shores and smuggled into the enormous, yet suffocating, city of London by a man literature has seen before: Lemuel Gulliver.

Eighteen years prior, Gulliver stumbled upon the island country of Lilliput only to return to London and be ridiculed for his claims of miniature communities, floating cities, and more. Being a man of science, Gulliver feels that upon publishing his book detailing his travels, he must also present the public with living proof of his story: a Lilliputian. Unfortunately, Lily suffers from Gulliver’s obsession with the truth and becomes his prisoner for half of her life. Lily must find a way to escape from Gulliver and to return to her home before time runs out; a year in her life is, after all, only a month’s worth of time.

Gulliver’s Travels is one of the first novels that inspired the phenomenon known as fan fiction. Lilliput gives life to a new perspective on the classic story; Gulliver’s adventures are not quite over and Lily’s are just beginning. This book encourages readers to use their own imaginations in creating back stories or sequels to some of their favorite novels, consequently allowing readers to develop creative and innovative minds.

Lilliput also provides fantastic imagery throughout as Lily is constantly coming up with comparisons that reflect the differences between her world and Gulliver’s. Imagine Gulliver’s tears as bucketfuls of water or being able to drink clouds from a straw; this is Lily’s reality. Throughout her journey, Lily discovers what it truly means to hope for something. Finn, her friend and rescuer, continually helps Lily to not lose sight of what she is working towards: her freedom.

Join Lily and Finn as they fight against cruel masters, controlling clocks, and their own doubt in order to find their homes and discover where they truly belong.