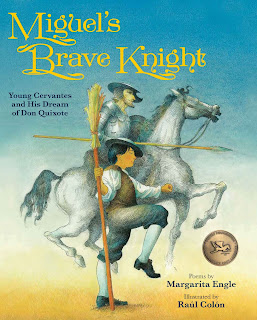 Have you ever wondered what inspired the creation of the first modern novel? Miguel’s Brave Knight: Young Cervantes and His Dream of Don Quixote tells the story of the boy who started it all. Written in easy-to-understand verse by Young People’s Poet Laureate Margarita Engle and accompanied by stunning artwork from award-winning illustrator Raúl Colón, Miguel’s Brave Knight will both delight and instruct readers of all ages as they learn about young Miguel de Cervantes, author of the Don Quixote.

While navigating the difficulties of living in 16th Century Spain with a gambling, vagabond, barber-surgeon father, Miguel escapes his struggles by daydreaming of a heroic knight. At a time when access to books was limited,and many writings were censored and banned, Miguel finds inspiration in storytellers and wandering actors, and longs to share his own imaginative stories with others. Finally at age 19, four of Miguel’s poems are published, launching the career of one of the greatest writers in the Spanish language.

This fictionalized first-person biography introduces children to important themes of poverty, censorship, and social justice while encouraging imagination, hope, and ambition. The book also includes back matter with historical context, more biographical information, and personal notes from both the author and illustrator to help readers learn even more about Miguel and Don Quixote and their legacy. Sure to become a classic, Miguel’s Brave Knight is a must-read for anyone who has ever struggled, questioned, or dreamed.

Read an excerpt, and check out the downloadable poster and Teacher’s Guide.

“Engle’s poems are lyrical yet direct… Colón’s pen, ink, and watercolor illustrations (inspired by the prints of Gustav Doré) accompany every poem bringing Engle’s words into sharp focus…. An intriguing, lightly fictionalized introduction to an iconic author, this will encourage readers to learn more about the first modern novel.”—Booklist, STARRED REVIEW

“Beautiful and engaging, this book will inspire readers to find out more.” —Kirkus Reviews, STARRED REVIEW

“Colón’s pen-and-ink and watercolor illustrations are paired perfectly with the text and the subject…This expressive picture book biography presents a solid argument for why Cervantes should be revered as an important figure in the Western canon. A gorgeous and well-crafted work for all nonfiction collections.” —School Library Journal, STARRED REVIEW

Look for Miguel’s Brave Knight at your local library, indie bookstore, or Barnes & Noble on October 1! And check out the rest of our Fall 2017 list, both new titles and new paperbacks!