Home > The World of Peachtree Publishing > Animal Story > Little Ones Growing Up: How Jo Weaver’s Baby Animals Have Matured 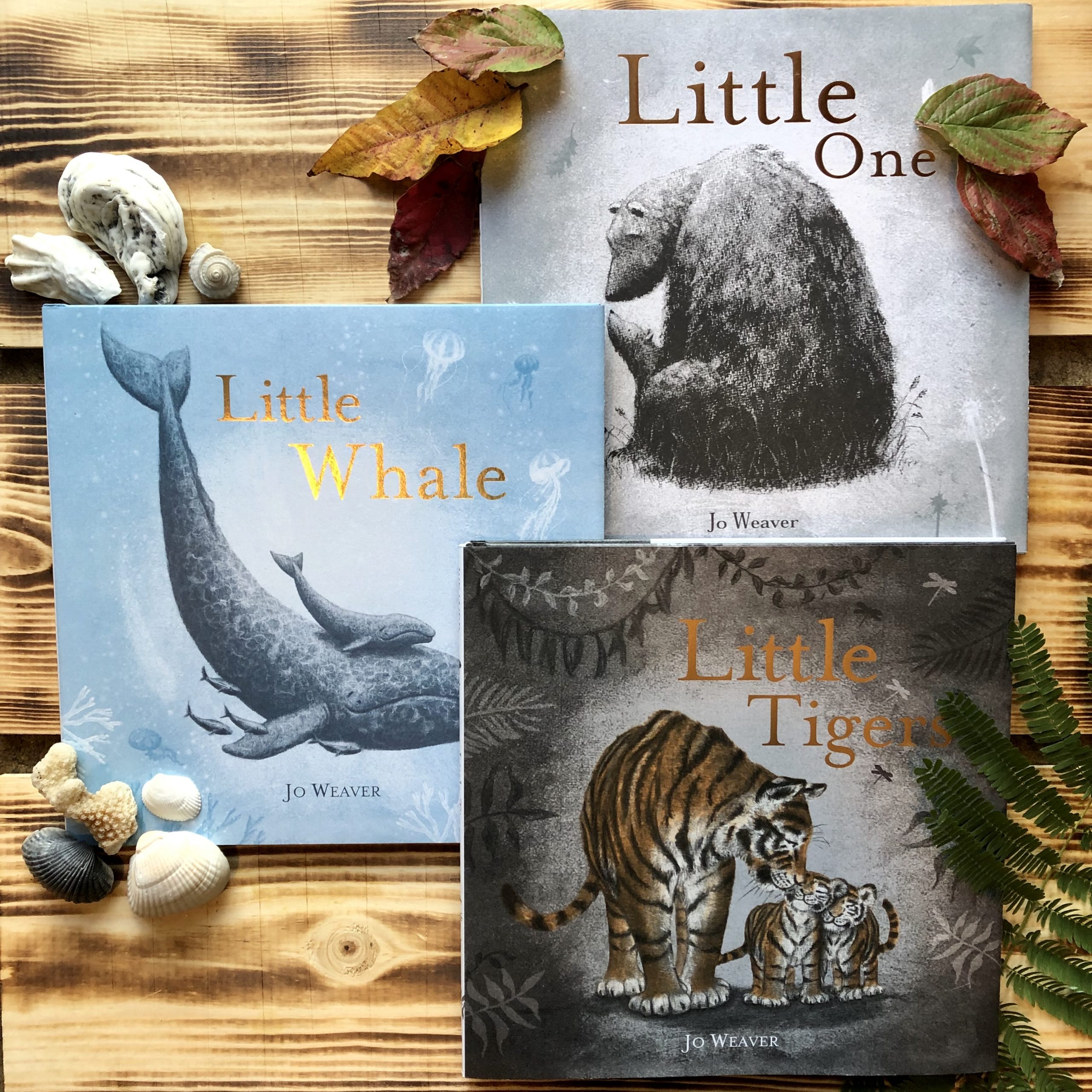 In 2016, author-illustrator Jo Weaver‘s first picture book Little One was published in the US and immediately garnered two starred reviews and some enthusiastic readers. The book follows a mother bear through the seasons as she introduces her new cub to the world. Weaver’s beautiful, unique, and nuanced charcoal artwork was greeted by readers with delight, and Little One quickly became a go-to bedtime story.

Fast forward two years, and Little Whale came on the scene and surprised readers with a new palette of deep blues that perfectly portrayed the underwater journey of a mother whale and her calf. It was a gorgeous contrast to the black and white of Little One. Beyond the palette change, reviewers quickly recognized the book as a gentle introduction to the topic of whale habits and habitats. Little Whale also presented an opportunity for young readers to explore the subject of whale migration and conservation.

With the publication of Little Tigers one year later, readers got to see the scope of Jo Weaver’s talent and the maturation of her subjects across three books. Little Tigers again featured a stunning new color palette and a new habitat, and, similar to the real world tie-in of Little Whale, Weaver included a note at the end of the book to draw attention to the endangered Bengal tigers that star in her picture book. Additionally, with the twin cubs of Little Tigers taking an active role in their mother’s search for a new home, the book demonstrated an increased independence that had been growing with each of Weaver’s books.

With each new title, Weaver’s baby animals have shown a little more maturity, and with the collection of three titles together, the progression can be seen clearly– the cub in Little One wobbles out of his mother’s den as a newborn, spending the following pages exploring and discovering the things Mother Bear demonstrates. The cub follows and trusts the mother bear explicitly, doing everything in unquestioning imitation of her.

In Little Whale, readers encounter a whale calf that has endless questions. Little Whale wonders “Where are we going?”, “What’s home?”, and “Are we nearly there?” as the two gray whales travel from the warm southern seas to their home in the North. Although, like the bear cub, Little Whale follows Gray Whale through every new experience, the questions show how the calf is one step ahead of Little One‘s bear cub, trying to inquire about and discover the world for itself. 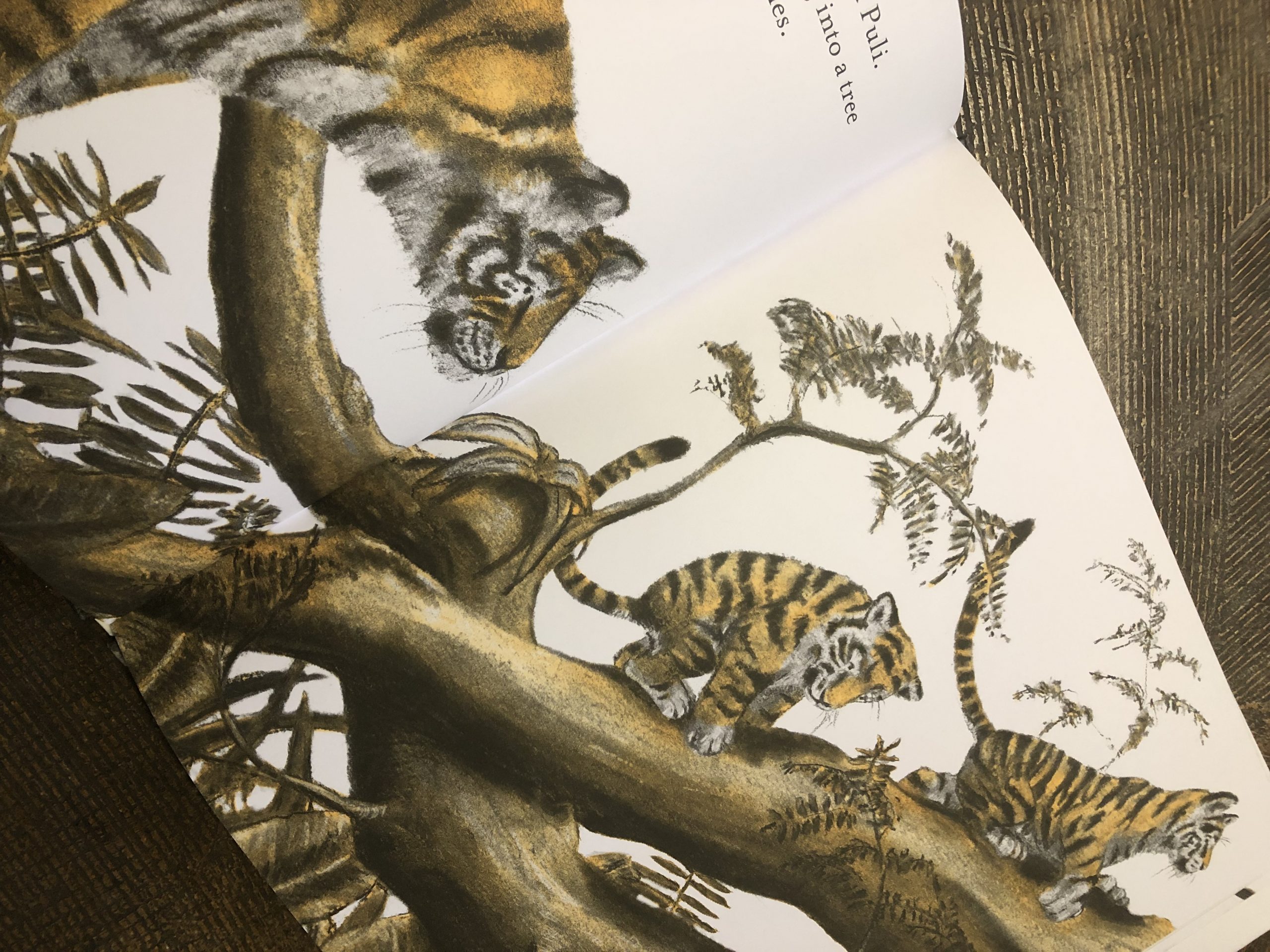 Finally in Little Tigers, the two Bengal tiger cubs play an active role in the journey they are taking with their mother.  As they look for a new den, each cub in turn gives suggestions and leads the small family to potential safe havens, testing their boundaries and learning the intricacies of home and survival. These twin cubs have moved beyond the explicit trust of the bear cub from Little One and the constant questioning of the whale calf in Little Whale. They have explored the jungle themselves and know of places their mother hasn’t seen. It is Mother Tiger who finds the perfect spot for them, but her cubs are working with her along the way.

Pick one that matches the developmental level of the young readers in your home or classroom, or use all three to discuss how these baby animals are different from each other. The quiet beauty of Jo Weaver’s books is unchanging, even as her little ones grow up. Be sure to add Little Tigers, out October 2019, to your collection!