Home > The World of Peachtree Publishing > Authors > Happy Birthday, Margaret Mitchell!
Margaret Mitchell was an enigma in her day. Virtually unknown except for breaking convention as a socialite and as the first female reporter for the largest newspaper in the south, Mitchell’s first manuscript was published almost in spite of her best intentions (After having given her manuscript to Macmillan publisher Howard Latham, she sent him a telegram reading “Have changed my mind. Send manuscript back.”).  It went on to become one of the most popular novels in American history, selling over 30 million copies worldwide. 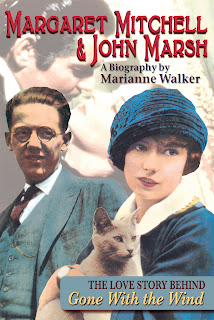 In her book, Margaret Mitchell and John Marsh: The love story behind Gone With the Wind, author Marianne Walker’s extensive research into the personal life of Mitchell reveals more than a few idiosyncrasies and quite the colorful personality. Marianne was kind enough to share with us this essay on one of Mitchell’s quirks–her unwillingness to ever reveal her true age!

Welcome to the blog, Marianne!

Oh, my! Margaret Mitchell would’ve been annoyed to discover that the whole world knows exactly when she was born. She never—ever—wanted any mention of her age, or any questions asked about it, or any attention given to her birthday. And now look at what we, her fans, are doing! This year, we are not only celebrating the 75th birthday of her only “baby”–Gone With the Wind—but also her 111th birthday on November 8.
Like many other women of her generation, Margaret—or Peggy, as friends called her—was extraordinarily sensitive about telling her age. Even when she was very young, she did her level best to conceal it. For a long time, she easily succeeded in getting folks to think that she was younger than she was; it helped that she was petite, youthful looking, and pretty. 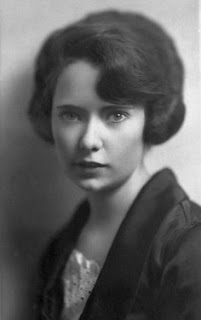 Her veracity was above reproach, except when she was questioned about her age. Yes, the truth is Margaret Mitchell refused to state her birth date at all unless some legal reason required her to do so and, even then, she could not let the truth be known.
For example, on June 15, 1925, she and her sweetheart John Marsh ran to the courthouse on their lunch break to apply for a marriage license. Right there in the clerk’s office in the Fulton County Courthouse, the seat of the judicial system in Georgia (where truth surely ought to prevail), she fibbed again. On the marriage application, she stated her age as twenty-two, when in fact she was twenty-four. No doubt even her fiancé didn’t know her correct age at the time. Later, on her driver’s license, she again falsified her birth date, stating it as November 8, 1908. (Good grief, that’s slicing off eight years!) Other instances provide evidence that the older she got, the younger she made herself.
After she became famous, she had great trouble concealing her age. She literally received thousands—no exaggeration here—of letters from fans, many of whom believed that she had lived through the Civil War, which they presumed was the reason she was able to write about it so eloquently. Whew, that notion really scorched her! But Peggy handled the matter politely—without revealing her age.
Absolutely nothing would make her veer from her principle: remain silent or lie! In November 1936, Mr. Sam Doerflinger, an executive at the Macmillan Company (her publisher), happily informed her that Gone With the Windhad been nominated for the Pulitzer Prize and that he would need some biographical information about her to submit to the nominating committee.  She bristled.
Imagine his shock when he read her tart reply written on Thanksgiving Day, 1936: “…I’ll gladly tell you where I was born. I was born here in Atlanta, Ga. But I am not telling when I was born.”
She went on to explain to Mr. Doerflinger that she had “never felt that a person’s age was the concern of anyone except herself and her family.” And, she said, “My feeling on this matter has been considerably strengthened since Gone With the Wind was published. The day seldom passes but that seven complete strangers either phone me or call at the door and ask point blank, ‘Just how old are you?’ The newspapers, news services, biographical reviews, etc. have been in a lather about the matter, too. The effect has been to arouse my stubbornness.”
The conclusion of her letter leaves us with no doubts about her feelings: “My age is my own private business and I intend to keep it so—if I can. I am not so old that I am ashamed of my age, and I am not so young that I couldn’t have written my book and that is all the public needs to know about my age . . . the curiosity seekers have made me stubborn on this point, and, if my reticence knocks me out of the nomination [for the Pulitzer], then I guess that’s just too bad.”  (Can’t you just hear some woman in the background, shouting. “Good for you, girlfriend!”)
So, in Peggy’s honor, why don’t all of us fans simply agree to say that the author of Gone With the Wind was a child prodigy, and let it go at that?