Home > The World of Peachtree Publishing > Behind the Story > Guest Post: Book Club with Carter Reads the Newspaper

After the publication of Carter Reads the Newspaper in February, we were thrilled to see how many young readers were connecting with the book, and how many gatekeepers were ensuring that the book was getting into the right hands. The Black Boys Read Book Club in New Orleans was one group that we were especially excited to connect with over the new book. They are sharing below about how their book club got started, and how their book club meeting with Carter Reads the Newspaper spurred some great conversations among the boys. 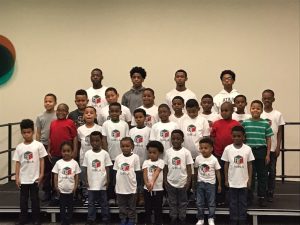 I guess you can say Black Boys Read NOLA started organically. We were living abroad in England for my husband’s job. Being away from New Orleans was a wake-up call. While it was an amazing overall experience, the boys really began to miss being around black people. Don’t get me wrong, there were a lot of black people all over Europe but simply not concentrated the way that they are in a city such as New Orleans. It’s crazy, you know? I believe we tend to take genuinely black experiences for granted when we are among ourselves so frequently in predominantly black cities.

As summer approached, our middle child, Dylan wanted to read 80 books before the summer’s end. While this made us proud, we are quite realistic as parents. We knew that this would be a huge obligation for us as well. After much back and forth, we were eventually able to talk him down to 60 books. As a reward, we agreed to award him with prizes of his choosing at 20 book intervals. Being the efficient parents that we are, we thought to kill two birds with one stone— rekindle their connection with black people through books while meeting Dylan’s 60 book benchmark.

In our efforts to find books that were very diverse, we happened upon lots of black authors and black social media accounts that really highlighted black excellence. Dylan ended up exceeding his 60 book goal and was awarded accordingly. We returned home May of 2018. This was just in time to receive the summer assignments for our sons. (Before I go on, I feel I should mention that the curriculum in England was extremely diverse and showcased people of African descent in an extremely positive light.) We were quite excited to see this, and we were also excited to see what book Dylan was going to bring home next. That said, we returned home to New Orleans, a city that is over 60% black, only to receive a summer reading list for Dylan that caused our jaws to drop. It contained zero books to which he, or any young black male, could relate.

We found this unacceptable. So, we took it upon ourselves to reinforce black positivity with our boys. It’s as simple as that really. Pride in oneself is knowing oneself and the best way to know yourself is to know your history. At school, all our kids get is one month a year, and it usually begins with slavery and ends with Martin Luther King and the Civil Rights struggles of the 50s and 60s. Our rich and colorful history goes back thousands and thousands of years. We built pyramids, invented democracy and dynastic system of rule. We spread rich and diverse culture all over the globe! So why start with the ugliest blemish on our history? 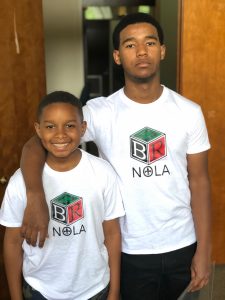 Black Boys Read NOLA seeks to amplify self-pride and dignity through books and history while also exposing our boys to things that most school systems will not. From Congo square, to STEM, to golf and horseback riding, to local musicians and so much more, we aim to show our members that there’s more out there than what the schools are willing to expose them to. Our aim is to show the boys that success can be attained in many ways.  Not just music and athletics. We also aim to modify the way we define success. I think most readers will agree that your salary and success in life are oftentimes mutually exclusive. The preschool to prison pipeline for black males is quite real, especially here in Louisiana. Consequently, we must fight back in any way we can. If these voids continue to exist in society, Black Boys Read NOLA will remain a necessary and vital entity. We are simply filling a demand for diversity and self-dignity in young black males.

I do tons of research and follow many Instagram pages that focus on diverse reading selections. One of my favorite pages to follow is Here Wee Read! We read fiction and nonfiction. However, the boys enjoy nonfiction more. They love to read about people who look like their ancestors and brought change to the world. When I saw a post about Carter Reads the Newspaper I immediately started planning for this to be our next read. The illustrations are breathtaking! My  top reads right now are Carter Reads the Newspaper by Deborah Hopkinson, Whoosh! Lonnie Johnson’s Super-Soaking Stream of Inventions By Chris Barton, Freedom in Congo Square by Carole Boston Weatherford, Charlie Takes his Shot: How Charlie Sifford Broke the Color Barrier in Golf by Nancy Churrin, Mae Among the Stars by Roda Ahmed and Grandad Mandela by Ambassador Zindzi Mandela.

The book club’s experience with Carter Reads the newspaper was amazing. The way it is structured was quite advantageous. It is an amalgamation of amazing black characters throughout history, all culminating on the accomplishments of Carter G Woodson. This was a unique opportunity for us to discuss Carter’s accomplishments as well as the history of Black History Month. It also gave us an opportunity to discuss some lesser-known, but equally important, black historical figures in the process.

It’s interesting, one of our boys made the point that Carter had essentially started a book club just like the one that we have at BBR NOLA. Like-minded individuals coming together to further educate themselves and learn from one another all while reflecting on the accomplishments of their ancestors. It’s amazing really. Things have come full circle. We encouraged our members to conduct some further research on the leaders that are mentioned in the back of the book, because, again, our history began long before the year 1 CE. It’s very important that the boys know where we all come from and what we come from. How technologically advanced our civilizations were before colonization. This book does an amazing job at getting that conversation started.

Follow the Black Boys Read Book Club NOLA on Instagram to keep up with all the books they are reading!