We are so excited to welcome YA author Jamie Pacton to the blog! Hear all about the inspiration behind her beautiful romantic fantasy The Vermilion Emporium. 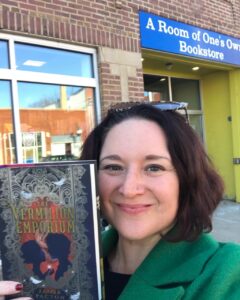 My YA fantasy debut, The Vermilion Emporium, released a few weeks ago and two questions I keep getting asked are: where did this idea come from and how did you go from publishing two YA contemporary novels to writing a YA fantasy?

I like to answer both these questions by quoting what I said at the start of my Author’s Note for The Vermilion Emporium:

“Stories, like lives, are strange, and take many unexpected turns….”

This sentiment has been true of my own personal life (oh, how it has been true), my writing life, and my publishing journey. But, let’s start with the second question—how does a writer with two YA contemporary novels (and more under contract) find herself writing a YA fantasy?

The truth is I’ve always been a fantasy writer, and I wrote upwards of ten Middle Grade and Young Adult fantasies before The Vermilion Emporium sold. Some of these got me my first and then my second agent; some of them went on submission and didn’t sell; some still live on my laptop, never to see the light of day. As fate and publishing would have it, however, the first contemporary novel I wrote, The Life and (Medieval) Times of Kit Sweetly, sold quickly and that’s the direction my writing took for a while. Kit’s journey to publication taught me that I didn’t need to just work in one genre and that I could go where my imagination took me.

Which was exciting to learn! But, even while writing contemporary fiction, I still longed to write fantasy. I love creating worlds, teasing out magical systems, and building characters who live in these enchanted stories. Which brings us to the second question: where did the idea for The Vermilion Emporium come from? Unlike the idea for Kit Sweetly, which I figured out in one night, while watching a swords-and-horses show at a medieval-themed restaurant, The Vermilion Emporium came to me in story threads, which I then wove together, much like the characters in my book weave together threads of starlight to make magical lace. 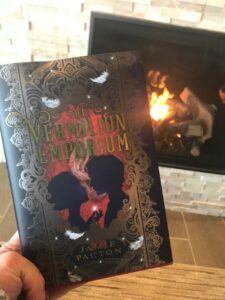 The first thread appeared on New Year’s Eve 2018, as I sat fireside in my home on a snowy evening, reading Erin Morgenstern’s The Night Circus. When I finished that book, I was full of magic, romance, whimsy, and utterly enchanted. I vowed to myself that someday I’d write a book that might make readers feel the same way.

Shortly after that New Year’s Eve, I read Kate Moore’s devastating non-fiction book, The Radium Girls. I was heartbroken to read this tale of greed, danger, worker exploitation, and death; and, I wanted nothing more than to honor the lives of these brave women by telling their story. I tried it as a YA historical novel first, but I couldn’t bear the thought of my girls perishing in the way the Radium Girls had, and so I tried it as fantasy. It stuck, and so the second thread of The Vermilion Emporium was uncovered. (And the book is now dedicated to the Radium Girls and my female main character, Quinta, is named after one of the Radium Girls).

The third story thread came to me as I tried to discover what deadly thing my characters would make, in the way the Radium Girls used radium to paint the dials and watch faces. While doing research for another book about Venice, I stumbled across a historical tidbit on kidnapped Venetian lacemakers and something in me stirred, saying, “Pay attention to this!”. With that nudge, I decided my characters would make magical lace, and it would have a terrible cost. 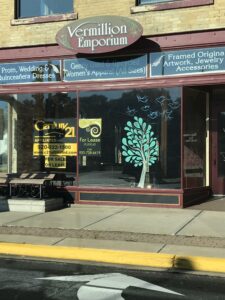 The last story thread that I needed was simply a title. But, what should I call this magical-lace-Radium-Girls-tribute-with-Night-Circus-vibes book? The answer to that question appeared in a now-closed boutique near my home in rural Wisconsin. It was called The Vermillion Emporium (spelled slightly differently than my book’s title). It was such a whimsical name on such an ordinary street and I was immediately taken with it. I remember saying to my husband, “What if there was a curiosity shop called The Vermilion Emporium and it sold all sorts of magical things…?”

With that last question, I had all my main story threads in place, and I started drafting The Vermilion Emporium. It took me several years to write the book and see it to publication—and those were hard years. Years of a global pandemic, relationship struggles, and even the unexpected sickness and loss of one of my children, which gutted me entirely. Through it all, however, I clung to this idea of an enchanted shop and a world where love, hope, whimsy, and magic were possible. The Vermilion Emporium got me through some of the darkest days of my life, and it is my dearest hope that it helps readers find some magic as well.