Award-winning author-illustrator Don Tate recently joined William Still descendants for their historic 150th anniversary family reunion. He introduced his forthcoming picture book, William Still and His Freedom Stories: The Father of the Underground Railroad (November 2020), which tells the little-known story of Still, also known as the Father of the Underground Railroad. Hear more from Don about the reunion, his appearance, and what it was like being part of this milestone event. 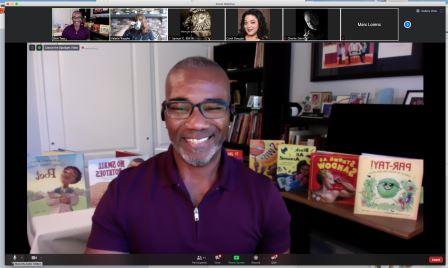 A couple Saturdays ago, I presented my forthcoming book, William Still and His Freedom Stories: The Father of the Underground Railroad  (Peachtree, November 2020), at the Dr. James Still Community Day event in Medford, New Jersey. Dr. James Still was an older brother of William Still, the subject of my book. It was the 150th Anniversary of this family reunion. Wow! What an honor to be part of an event that has been celebrated for so long and that has continued to highlight the amazing work the Still family has done over generations. It made my participation this year feel extra special. 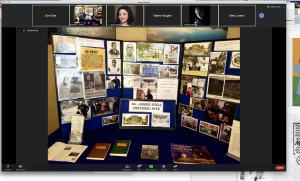 Every year for the last 150 years, the Still family holds a family reunion there to celebrate their family legacy and to express pride in the family’s African-American history. Due to COVID-19, this year’s reunion was a little different, as it moved online and the invitation was extended to the public. But the purpose of the event stayed the same: to celebrate the Still family and the contributions they have made to their community, as well as to recognize the community help that has kept the Still family legacy alive. When I began to write and illustrate this book, I didn’t know about this annual event and could have never imagined being able to speak directly to William Still’s descendants about my research on their forefather, and the way the book will help introduce his story to thousands of children around the country. It’s very humbling. 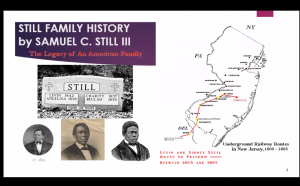 The morning opened with Samuel C. Still III—family historian, Chairman of the Dr. James Still Education Center, and third great-grandson of Levin and Charity Still (William and Dr. James Still’s parents)—presenting the family history. He spoke about William Still’s work at the Anti-Slavery Society office alongside other abolitionists like Lucretia Mott and Thomas Garrett, and included the manumission document, an official paper that granted Levin Steel (later Levin Still) his freedom. This was a tension-filled scene that I covered in my book. Samuel Still also offered a virtual tour of the Dr. James Still Historic Office Site and Education Center, a historic site in Medford dedicated to teaching, restoring, and preserving the legacy of Dr. James Still. The site also offers information about William Still and other abolitionists. Other event presenters included Folk troubadour Valerie Vaughn, who crooned her original song “Son of Charity,” which honors William Still and his mother Charity (Sidney Steel) and tells about the harrowing night she escaped slavery with her two young girls; and herbalist Fran Polite, who shared an immune-boosting recipe reminiscent of Dr. James Still, known in the area as “The Black Doctor of the Pines.” The presentation ended with an archaeological discussion concerning the land near the Dr. James Still Historic Office Site and Education Center, which is undergoing renovation. 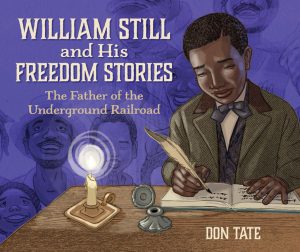 Following Valerie Vaughn’s musical presentation, I spoke about my inspiration behind writing a book about William Still, an unheralded hero whose story I felt needed to be told. I followed with a lively reading—all virtually from my home in Austin. It was such an honor to present to this historic family and all of the people who attended the virtual event. When I was invited to speak, I was nervous—I mean, this is the William Still family! I felt much better, however, following our rehearsal, when family members told me how much they loved the book. “I can tell you’ve done your research,” a teacher in the family told me proudly. I was only sorry that I could not physically put a copy of my book into the hands of all of the young Still family descendants. Sharing virtually, however, was the next best thing. Samuel Still called me later that day. I could hear so much emotion in his voice as he told me how much he loved my talk. “The family is still sending me texts and emails about wanting a copy of that book!” he said. I look forward to returning next year to celebrate the 151th anniversary.