Home > The World of Peachtree Publishing > Books for Boys > Football Facts Even a Bookworm Can Appreciate
Well, folks, it’s officially summer. You know what that means, right? Football season is right around the corner!
We’re actually pretty big fans at Peachtree, and not just because we’re southern. Fred Bowen, coach and Washington Post sports columnist, is coming out with a brand new football title this August! 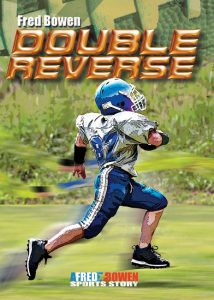 Double Reverse is an action-packed middle grade chapter book chronicling one team’s inspiring journey in conquering expectations and seeing themselves, not for how they look, but for what they can achieve.
Now, we know that the stereotypical bibliophile isn’t a huge football fan, but until reading becomes America’s favorite pastime, we thought we’d put together some fun facts about the sport to help you at those inevitable football watch parties.
If you’re itching for more awesome facts about America’s favorite past-time, these all came from Pro Football Hall of Fame’s official site.

Visit Fred Bowen at fredbowen.com and sportsstoryseries.com. And look for Double Reverse in your local library or bookstore!