Home > The World of Peachtree Publishing > Behind the Scenes > Counting Down with the Editor: A Letter from Kathy Landwehr

We are continuing to count down to September 1st and the publication of Countdown: 2979 Days to the Moon! Hear from this amazing title’s editor about why she is so excited to get this book into reader’s hands. 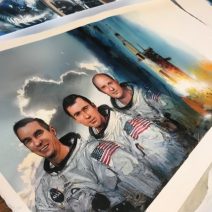 One of my first memories is the Apollo 11 Moon landing. I was about four years old and I watched it on a small black & white television, between the legs of the adults who attended the party my parents threw in celebration.

Almost forty years later, it may seem like we’ve always had a space program. Some kids, like my son, may take it for granted. This is why I’m so eager for you to see Suzanne Slade’s remarkable new book, Countdown: 2979 Days to the Moon.

In this gorgeously illustrated volume, award-winning writer Suzanne Slade reminds us of how daring and mind-blowing the Moon landing really was. Written in free verse, Countdown covers Apollo missions 1 through 11—from the day President Kennedy announced the goal of landing a man on the Moon within the decade, to the moment that Neil Armstrong took his first step on the surface of the Moon. It’s accompanied by stunning paintings from Thomas Gonzalez, illustrator of the New York Times bestseller 14 Cows for America. 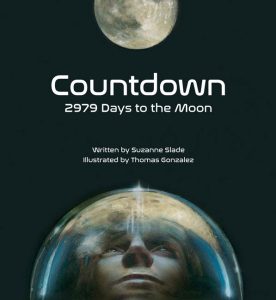 And did I mention that Suzanne, in addition to being an author of more than one hundred books, is also a rocket engineer? No really! Before she began her writing career, she worked at McDonnell Douglas Space Systems on a number of projects, including the third stage of the Saturn V rocket, used in the Apollo missions.

Countdown is truly inspiring (I dare say it brought some in-house readers to tears)—but also brutally realistic about how much work, time, and sacrifice it takes to do something truly amazing. It’s a beautiful tribute to the four hundred thousand people who helped make the dream of a Moon landing a reality. I hope you enjoy it.