A decade ago, Peachtree released 14 Cows for America. Carmen Agra Deedy and Thomas Gonzalez, in collaboration with Wilson Kimeli Naiyomah, had teamed up to tell the touching story of solidarity between nations and cultures, providing a lasting contribution to readers seeking both comfort and an understanding of a difficult time in our nation’s history. It went on to become an award winner and New York Times bestseller. Now, ten years later, author Carmen Agra Deedy reflects on the birth of her bestselling picture book.

I read the strange and affecting story about the gift from a Maasai village in 2002. It was a sweltering April morning in Georgia. I live in the South, where summer arrives early and stays late, like an ill-bred guest. Coffee brewing, I opened my front door, leaned down, and plucked the New York Times from the porch steps. The paper always arrived one day late—an acceptable inconvenience. The literary style of the Times made the dullest news worth reading—and, not infrequently, worth rereading.

But that day, on the front page, there was an article unlike any other I had read in that storied publication. 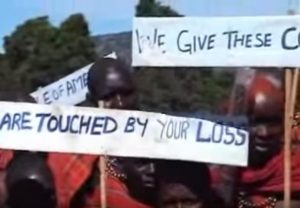 The headline stated in simple, if cryptic, language: “Where 9/11 News Is Late, but Aid is Swift.” According to reporter Marc Lacey, a Maasai village in Kenya had presented a gift of fourteen cows to the United States in a ceremony on Maasai land. The story was accompanied by a gripping photograph of Maasai women holding signs; one particularly poignant message read, “We send these cows to help you, September 11 tragedy.” I allowed my body to sink onto the stoop of my front porch, newspaper trembling just enough to blur the words. Still, I read it, and wept. And reread it and wept some more.

It has been nearly twenty years since 9/11, and it’s inevitable that young adults today (children at that time of the attacks) would have few emotional memories associated with that day. It may help to give my reaction some context.

Seven months had passed since 9/11. Americans were still raw, wounded, isolated, and confused. The sight or sound of an airplane overhead still triggered anxiety in many of us. Although much of the world seemed to share in our horror and disbelief, a Maasai tribe of some five hundred women and men were willing to reach out to us in such a personal and generous way. And how did they do this? With a gift that was almost as dear to them as a child or a plot of land—fourteen sacred cows from their herd.

They offered the cows in a ceremony attended by the U.S. Ambassador to Kenya. I would later learn that his visit included a little-known incident. According to their tradition, the women of the tribe always made a beaded belt for every woman who lost a child; the gift symbolized both protection and reassurance that other children would follow. During the ceremony, such a belt was placed around the womb of our Ambassador’s wife. 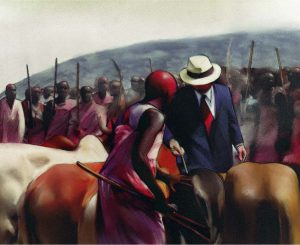 The day I found the article, I only scribbled a few notes on a legal pad and tucked everything away in a filing cabinet, where it all was to remain for several years.And then one summer, thanks to a Carson McCullers Fellowship, I was granted some time to write. I had intended to work on a different project. The Maasai story was nothing more than a newspaper article and a handful of notes: a zygote of a tale. But I took it along to Columbus, anyway. I kept turning to it from my intended manuscript, drawn by the fascinating elements of the story: the unlikely presence of a young Maasai warrior in New York City on 9/11, his return to Kenya to tell the tale to the elders of his tribe, the decision to send for the American Ambassador in Nairobi, the strange and splendid moment when our Ambassador accepts an unsought, unexpected gift to a mighty, crippled nation from a fierce and generous people.

As I wrote the story, I often thought of Aesop’s fable, “The Lion and the Mouse,” in which a mouse becomes the unlikely savior of the mighty King of Beasts. I think we all want to believe that in our most wretched hour there will be someone—known or unknown to us, friend or erstwhile foe—who will come to our aid.

I have often hoped the story of the Maasai would provide a gentle introduction to the events of 9/11. As the tale of their gift to a nation in mourning traveled around the world that April in 2002, it reminded humanity that goodness has never been eradicated from our species, despite wars and despots and genocide. Goodness has always emerged, battered, yet whole, from the rubble of this world’s darkest moments. The Maasai, in their now decades-old moment of light, are proof of that.