Nettie Delaney has just been accepted into a prestigious performing arts school—the very same school her superstar mother attended. With her mother’s shadow hanging over her, Nettie has her work cut out for her—and everyone is watching. To make matters worse, Nettie hasn’t been able to sing a single note since her mother died. Whenever she tries, she just clams up. But if Nettie’s going to survive a demanding first year and keep her place in a highly coveted program, she’ll have to work through her grief and deliver a showstopper or face expulsion.

All may not be lost, however, when Nettie stumbles upon a mysterious piano player in an empty studio after class. Masked behind a curtain, can Nettie summon the courage to find her voice? Or will the pressure and anxiety of performing come crashing down?

We asked Vanessa Jones about her inspiration and writing process for Sing Like No One’s Listening, a moving new story about grief, healing, and the performing arts. 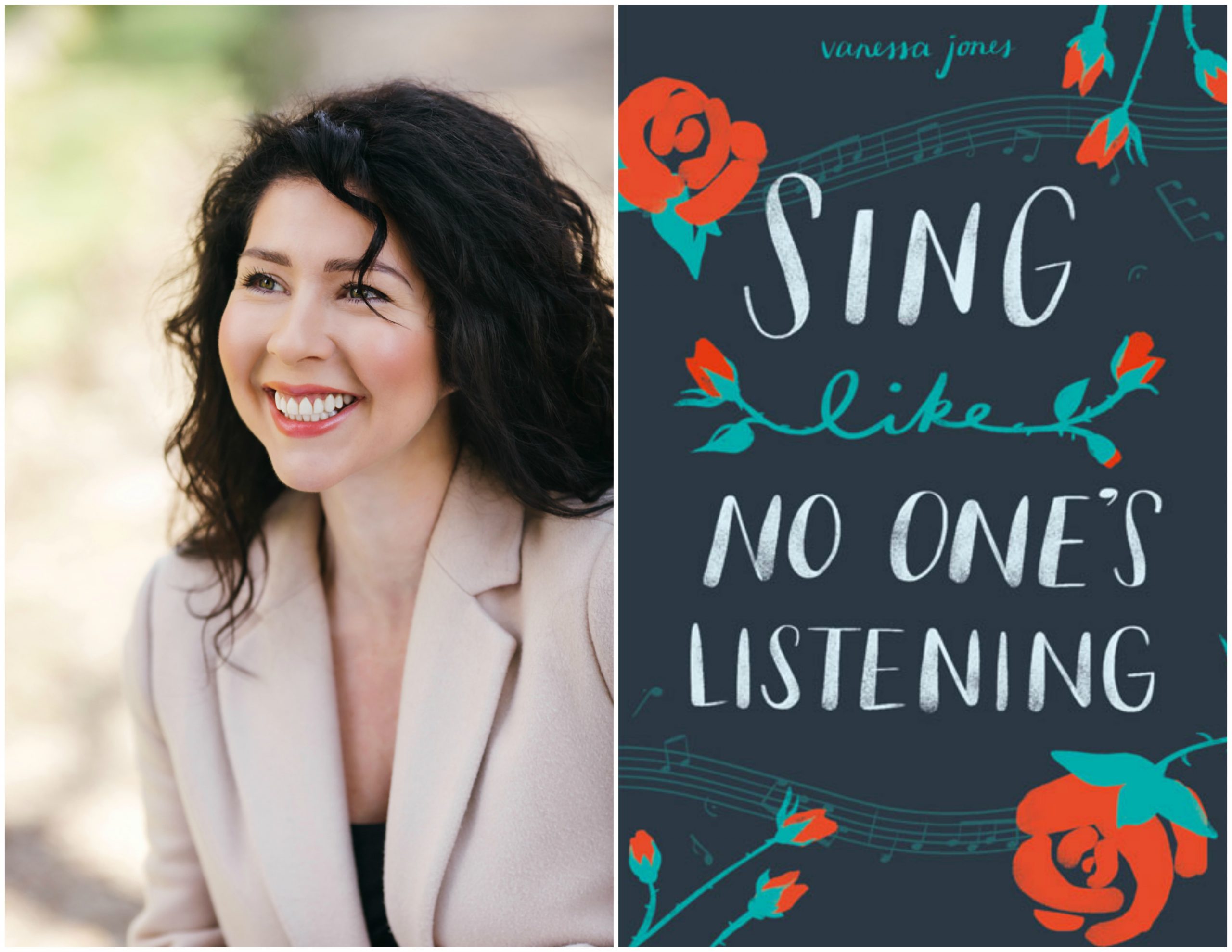 Q: What first inspired you to write this story?

A: I went through a phase in my career as a performer where I suddenly developed stage fright. As soon as I had to sing, I’d start shaking, my heart would race, and my voice would seize up, which was unhelpful in auditions! When it started affecting my ability to get work, I got help, and luckily things improved hugely. Years later, I started thinking about the idea of what happens when “the fear” gets in the way, and I guess this was the inspiration for Sing Like No One’s Listening.

Q: What was your favorite part of this story to write? Did you ever find it difficult to write about such intense grief?

A: I’m not sure if this is the same thing, but I definitely found the scenes with Miss Duke the easiest to write. She was the first character I wrote, and she seemed so fully formed from the start that I almost felt like I knew her in real life. I lost a friend to cancer while I was writing the first draft, and it became more difficult to write about Nettie’s grief—I guess because to write with any authenticity I had to go there emotionally with her, and that was hard at that time.

Q: Are there any qualities in Nettie that you see in yourself?

A: Nettie is quite different from me as a person— certainly from how I was as a teenager—but I think her willingness to carry on when things get tough is something we share. I tend not to give up.

Q: When you first began your writing career, who was your “Cecile Duke” that helped you improve and encouraged you to stay persistent with your writing? What do you like most about Miss Duke and her relationship with Nettie?

A: I definitely had mentors as a writer, but I think they’d be horrified if I compared them to Miss Duke! As far as my career in college and West End theatre goes, I encountered many Miss Dukes along the way—equally as commanding, enigmatic, and terrifying.

Q: Which books have had the biggest influence on your writing?

A: That’s a difficult question! I try to read as much as I can—as many different genres and narrative styles as possible. I think reading lots is important if you want to improve as a writer. The last YA book I read was Meat Market, by Juno Dawson. I love the authenticity of her characters’ voices.

Q: What is your writing process like? Do you have a favorite writing spot?

A: Basically I sit down in the morning and, depending on what I’m writing, I don’t stop until I’ve hit the word count target I set or the scene I wanted to finish that day. Even if I’m not feeling it, if I sit there for long enough, the words usually come! I honestly think writing is ten percent ideas and ninety percent persistence. My favorite writing spot is on the little bench under a tree in my garden, but I’ll happily write anywhere—my brain is quite good at blocking out distractions, so it doesn’t matter what’s going on around me, I can usually get in the zone quite easily!

Q: What do you enjoy most about writing for young adults?

A: I work with young adults (I run a theatre school in the UK), so I spend a large part of my working week with teenagers, and we never stop laughing. I guess for me, writing YA is an extension of that. I remember so clearly how I felt at that age—how anything was possible. The new-found independence I had. The feeling that my life as an adult was about to start, and how exciting that was.

Q: If you had to add one more scene to this book, what would it be?

A: Oh, my goodness, so many scenes didn’t make it to the final cut! There were several scenes that I absolutely loved writing, but they didn’t further the plot enough, so they had to go. One was where Nettie went charity shop shopping (do you call it thrift store?) and found a dress that had once belonged to her mother, which I loved writing.

Q: If you had to pick one, would you choose singing or dancing?

A: I feel like that’s like asking me to choose between my children! I honestly couldn’t say… I guess dancing kind of hurts these days, so… actually, no. I’m not choosing.

Q: If you had to pick a song from a musical to describe this book perfectly, what would it be?

A: I’ve been thinking about this for way too long, and I still can’t find an answer. But if Sing Like No One’s Listening was ever made into a musical, I’d love Pasek and Paul to write it. Dream big, as they say.

Q: What do you think Nettie’s mom would tell her to help her through her struggles?

A: I think she would tell her to believe in herself, and in her friends.

Q: Nettie proves that even when you’re pursuing your dream, there will be moments that make you want to give up. Why do you think it’s important for your readers to understand that although things may get tough, you should never sacrifice something you’re passionate about?

A: It’s important to stay focused, of course, but I don’t think it’s a given that you should never sacrifice something you’re passionate about, for example if things get so tough that your mental health starts to suffer. Your own well-being should always be a priority. Having said that, I think learning to keep going in the face of failure is vital, especially when you’re just starting out. What seems like a setback could be the best thing that ever happened to you.

Q: What do you hope readers learn from Nettie’s story?

A: I hope readers take from it a sense that they can succeed, even when the odds are against them. I hope Nettie’s story inspires them to believe in themselves, whatever their goals.