In 1961, President John F. Kennedy announced that the United States would try to land a man on the Moon by the end of the decade. During the two thousand, nine hundred and seventy-nine days that followed his speech, eighteen astronauts climbed into spaceships; three of them died before even leaving the ground. Eight rockets soared into space. And four hundred thousand people—engineers, technicians, scientists, mathematicians, and machinists—joined Project Apollo in hopes of making the dream a reality.

Author Suzanne Slade answers some questions about her background in mechanical engineering, her research process, and the significance of creating Countdown: 2979 Days to the Moon. 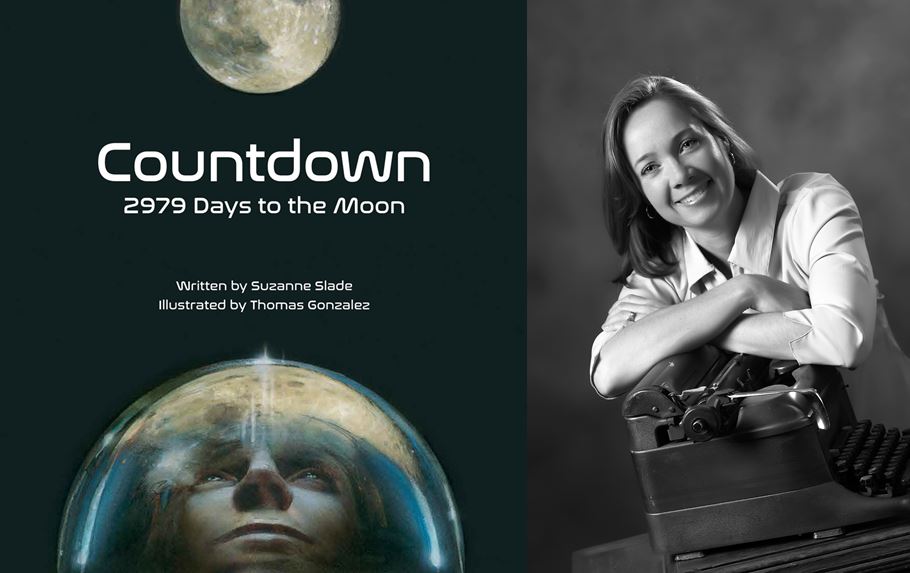 Q: What was your inspiration for this book? 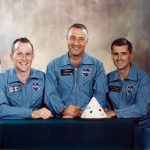 A: Many factors helped inspire Countdown, such as the 50th anniversary of the first moon landing (July 2019), my own interest in space travel and previous work on rockets, and the remarkable perseverance of the Apollo team.

Ultimately, there was one aspect of that incredible first moon landing which motivated me to take on this colossal writing project. I really wanted to share the little-known facts of the early Apollo missions—their surprises, successes, and struggles—with readers. For example, the brave Apollo 1 astronauts all died on the launch pad when their command module burst into flames during routine testing. 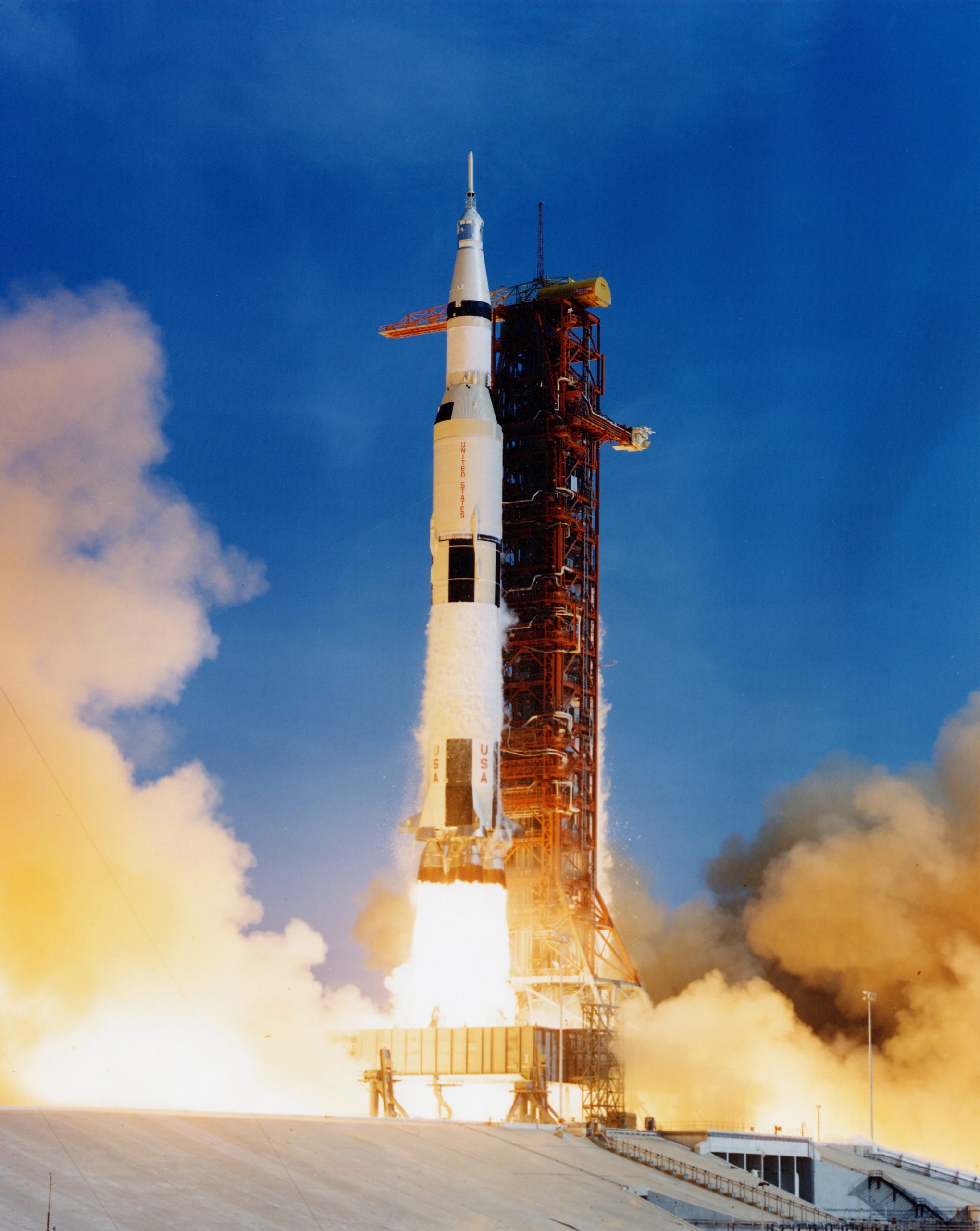 Q: How did your background in mechanical engineering and working on rockets for NASA contribute to the development of this book?

A: My engineering degree, and my experiences at McDonnell Douglas Space Systems working on rockets for NASA, provided a technical background to help me understand the basics of the Apollo spacecraft (Saturn V rocket, command module, service module, lunar module), but I still had a LOT to learn.

Once I understood the content/events I wanted to share, I had to figure out the best way to convey this technical information so it was interesting and understandable for young readers. My fantastic editor, Kathy Landwehr, was great at asking questions (then more questions!) which helped refine the story and science content for younger readers.

Q: Why did you decide to write this book in verse?

A: Actually I didn’t make this decision. The story did. After years of research and completing a detailed outline, I finally decided it was time to start writing. When I sat down to start Chapter 1, the words came out in short lines. The text felt powerful, tense, and urgent, just like the events they were describing. So I decided to keep writing the story in free verse. With some books, it seems the story knows how it wants to be told and the author just needs to go with it.

Q: Many readers have had emotional experiences reading your book. Why do you think this subject and your approach to it evoke such a passionate response?

A: I was very surprised when I heard two people cried after reading the book. But then, I recalled getting emotional while reading the astronaut transcripts during several perilous events, many of which are included in the book. When you read about actual people—with their own fears and precious families at home, putting themselves in incredibly dangerous situations for the noble purpose of exploring space—it’s hard not to get emotional. Tom Gonzalez’s glorious illustrations are also powerful. His stunning, detailed work heightens the emotional experience of this book. 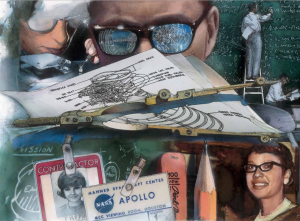 Q: One of the themes in your book is “teamwork.” Why did you choose to include this theme in your narrative?

A: Most obviously because Project Apollo required the teamwork of 400,000 men and women, all contributing their various skills, to be successful. For most team members, the project involved a lengthy, several year commitment filled with many trials and disappointments. I hope Countdown helps readers understand that being part of a team isn’t always easy. But if team members continue to work hard, and do their best to get along despite problems and disagreements, they can accomplish wonderful things together!

Q: What was something new you learned while interviewing Alan Bean?

A: Interviewing Alan Bean, the fourth man on the moon, was one of the most rewarding experiences in my 20+ writer years. I learned a LOT from this kind, humble, and wise man. It was fascinating to hear about his long road to become an astronaut, his philosophy about being an effective team member (consider others better than yourself), and how overwhelmed he felt when he walked on the moon and saw the sparkling Earth for the first time. It was fascinating to hear about the one thing he wished he’d done—smuggled a football on board so he could throw an incredibly long pass on the moon!

Interestingly, I also learned about punctuality through a humorous event. For our second interview, Alan and I had agreed to talk at 9am on a Monday morning. Days before our call I checked the time zone map to confirm his Houston home and my Illinois address were in the same zone. Monday morning I double checked that his email said 9am, cleared my throat, and dialed his number. Alan answered, and politely told me to call him back at our appointed time and he’d be ready then. We hung up and I panicked. How had I miscalculated? I quickly rechecked the time zone map. We were in the same zone. I looked at my computer’s clock: 8:58am. Hmm. Did he mean I should call him back in 2 minutes—at exactly 9? I panicked some more. What else could he mean? Two minutes later I nervously dialed his number. He answered and said, “Hi Suzanne, now I’m ready to talk.”

Q: Why is it important for readers to learn about the different events leading up to Apollo 11, such as Kennedy’s assassination?

A: The first moon landing was decades ago. It’s often summarized in history books with a few lines or paragraphs that talk about the Apollo 11 landing and Neil Armstrong’s first step on the moon. But I think it’s important for readers to also understand the sacrifices, struggles, and determination it took to get to the moon. This phenomenal accomplishment was incredibly daunting, so I hope Countdown provides insight into the exceptional events of the 2979 days which culminated in that first landing. 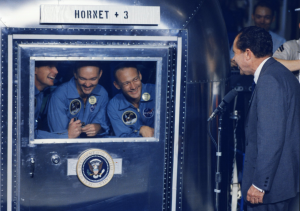 Q: At the end of each chapter you include fact sheets about each Apollo mission. Why did you decide to have extra information for each chapter in addition the information at the very end of the book?

A: I know readers are curious, so I thought they’d appreciate close-up photos of the astronauts from the mission they’d just read about, along with brief astronaut biographies and compelling mission photos.

Q: You included a wealth of information in this book. Is there anything of note you opted to omit?

A: My research for this book took over eight years. My sources included NASA transcripts*, Apollo photos, astronaut autobiographies, other reliable books, NASA websites, and more. I also interviewed the fourth man on the moon, Alan Bean, corresponded with astronaut Walt Cunningham, and worked with experts from NASA and in the aerospace industry. So, of course, a great deal of my research couldn’t be included in the book. One of the toughest things an author has to decide is which facts, quotes, and events will be included in the book, and which won’t. In the end, I did my best to share a wide variety of the astronauts’ experiences, such as the successes, stressful challenges, and fun surprises they encountered.

[*Check out the NASA Transcripts yourself! The Apollo Flight Journal has discussions between astronauts and mission control while the crew was flying. Their dialogue after landing on the moon is in the Apollo Lunar Surface Journal.] 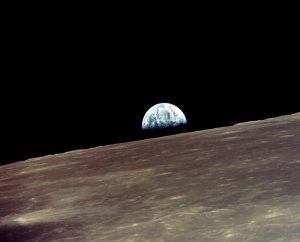 A: In a word: tedious. In the question above I listed many of my sources, but the biggest challenge was organizing all the information I uncovered. With any book research, it’s hard to keep accurate records of sources. But for a technical project like this, it was particularly daunting. So I created a detailed “Sources Doc” where I listed all the sources I used. It contains every source, and lists the exact page number or web link where I found each fact in the story. I continually updated the Sources Doc throughout the project. Naturally, things get a little dicey when you find conflicting facts in different sources, but that’s a long discussion in itself. The Sources Doc for Countdown ended up being 51 pages long. After Peachtree acquired the book, they sent my Sources Doc to the illustrator, Tom Gonzalez, so he could reference it as part of his research.

Q: How do you feel that the Apollo missions are relevant today?

A: The discoveries made by the Apollo program are extremely important today, and for the future too. These missions not only allowed us to learn about the moon (it’s history, geography, how it was formed, etc.), they also helped scientists learn more about space, space travel, Earth, other planets, and much more. You can check out Air and Space Museum’s “Top Ten” Apollo Discoveries list (#2 is my favorite.)

Q: How do you hope Countdown will be used in classes and elsewhere? 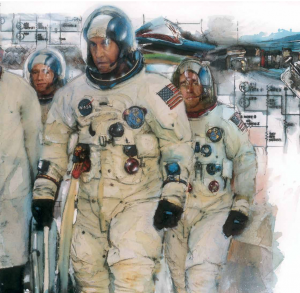 A: It’s exciting for an author to think about how others might use his/her book. Here are a few of my “author dreams” for Countdown. I hope it…

Q: What do you want readers to take away from this book?

I hope readers gain a broader understanding of the sacrifices, teamwork, and sheer determination it took to launch astronauts from Earth, transport them 240,000 miles through space, land the first man on the moon, and bring the team safely home. It was truly an astounding accomplishment!

Countdown: 2979 Days to the Moon will be at your local library, indie bookstore, or Barnes & Noble September 1! Read an excerpt, check out the book trailer, poster, and Teacher’s Guide, and don’t forget to follow along on our Facebook, Twitter, and Instagram pages for more inside looks and amazing space facts.