In The Other Side of Free we read about Jem, an escaped slave who has found freedom in Spanish Florida at Fort Mose in St. Augustine. Or, at least he thought it was freedom. Jem faces new challenges at every turn in this adventurous historical fiction novel from Krista Russell. 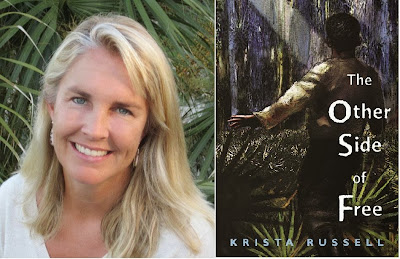 Here to tell you more about the story and the history behind it is Krista herself! Welcome to the blog!

A promise, an oath, and a true story of colonial America
What I love most about writing historical fiction is the digging. Before visiting Fort Mose in St. Augustine, FL, I had no idea that the earliest version of the Underground Railroad actually ran south. I started looking at primary sources (the pieces of the past that bring history to life) and learned that those who came seeking freedom weren’t just running away; they’d been invited. It was a time of invasion, rebellion, and shifting alliances – a veritable action adventure movie plot unfolding on the shores of north Florida.
The people who founded Fort Mose, didn’t wind up there by accident. They came by royal invitation. In 1693, Charles II of Spain issued a proclamation which would shape the history of colonial America. To African slaves who escaped English colonies and came to Spanish Florida, he promised “liberty to all…the men as well as the women…so that by their example and by my liberality others will do the same.”
For those who heard about the king’s promise (despite an English mum’s-the-word policy) and made the dangerous journey south, the quest for freedom had not ended. Instead, they found that the Spanish offer came with some serious strings attached. In addition to converting to Catholicism, the escaped slaves were required to swear an oath to “spill their last drop of blood” in defense of the Spanish King and to be the “most cruel enemies of the English.”
Accepting these terms, they built Fort Mose, the first legally sanctioned free African settlement in what is now the United States. About two miles north of the palisade walls which surrounded St. Augustine, Fort Mose was all that stood between the Spanish and their English enemies when war broke out in 1739.
In 1994 the site of Fort Mose was designated a National Historic Landmark and listed on the National Register of Historic Places. In 2009, the National Park Service named Fort Mose a precursor site on the National Underground Railroad Network to Freedom.

A hand-made silver medallion, dug out of the marsh by an amateur archaeologist in the 1980s, was the primary source which inspired my middle-grade historical novel, The Other Side of Free. I’ve seen copies of the 1693 cedula (proclamation) and records from the South Carolina House of Assembly which blame Spain for the 1739 Stono Rebellion (it was to St. Augustine that the rebels were headed when the uprising was suppressed).
What was true then is true now: We live in society of many cultures and global influences. Stories like this one inspire me to keep digging.
Krista Russell writes historical fiction for young readers. She is the author of Chasing theNightbird (September 2011), and The Other Side of Free (October 2013) and a graduate of Agnes Scott College, The London School of Economics and Political Science, and Seton Hill University. Chasing the Nightbird was winner of the 2012 Massachusetts Book Award for Children’s/Young Adult Literature, a 2012 Notable Social Studies Trade Book for Young People, a Pennsylvania School Library Association’s Young Adult Top 40, and a Parents’ Choice Recommended award book. Visit her website at www.kristarussell.com.

Here’s your chance to win a copy of this awesome book! Email me, send a tweet to @PeachtreePub with #funfact or comment below and tell us about a little known piece of history that interests you! (Yes, it can be from The Other Side of Free!) I’ll pick a winner on October 1!