Home > The World of Peachtree Publishing > Blogs > A Darkening of Dragons: The Magical Retelling of a Dangerous Legend 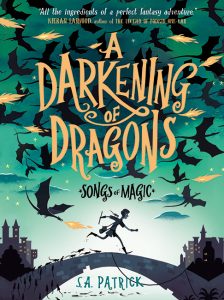 A Darkening of Dragons
by S.A. Patrick

Patch Brightwater is a boy with a gift, but it isn’t serving him well lately. He’s a Piper, able to wield power through music; but when he uses a forbidden spell to save a village from rats and his plan goes awry, the only thanks he gets is a prison cell.

But there’s something more dangerous out there than a rule-breaking thirteen-year-old… The Piper of Hamelyn, the greatest shame of Patch’s kind, is at large. Years ago, the Piper of Hamelyn caused the disappearance of a whole village full of children, leading them straight into stone. His next strike, that time in dragon territory, nearly brought humans and dragons to war. Now the evil Piper is on the loose again.

It’s up to Patch, a girl-turned-rat named Wren, and Barver the fire-breathing dracogriff to track the Piper down, unveil his sordid secrets, and stop the wickedness he has in store. If they fail, the uneasy peace with the dragons could be destroyed forever, and untold horrors will surely befall both realms.

S.A. Patrick’s debut children’s novel A Darkening of Dragons brings fantasy, adventure, and a dash of horror together in this creative retelling of one of the darkest legends of all time: the Piper of Hamelyn. Fans of J.R.R. Tolkien, Terry Pratchett, and How to Train Your Dragon won’t want to miss this Carnegie Medal-nominated series starter.

“Filled with adventure, magic, and humor, this multilayered story makes for a rich read. The promise of a sequel will satisfy those who are left wanting more by the sudden ending.” —Kirkus Reviews

“Patrick’s clever, compelling story is set apart by the incredibly rich history and mythology of its world. It is by turns dark and funny, and the interspecies friendships ring warm and true.”—Booklist

Find A Darkening of Dragons this April at your local library, indie bookstore, or Barnes & Noble, and be sure to check out the rest of our brand-new books coming to Peachtree this season!